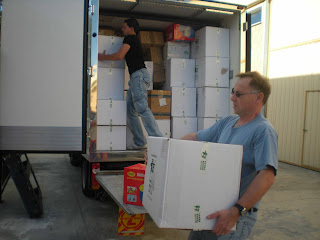 Last Saturday we were loading the container bound for Cuba. It really is a big container the size of a trailer truck and we completely filled it. In six hours we were able to transfer over 630 boxes from the storeroom to the container which was situated on the forecourt of a storage area belonging to one of our collaborators. It was really beautiful to see the group of volunteers mostly British but not forgetting people from Holland, Germany, Spain amongst others, working so hard for six long hours without a rest. The volunteers were of all ages from 4 to nearly 80. These good people offered their saturday afternoon to 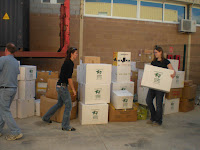 help Cuba which was marvellous considering that most of them have never been to the country and do not have the emotional ties that we Spaniards have with the Pearl of the Antillas.

The boxes containing medicines worth approximately €15.000 which were purchased from Farmamundi (a pharmaceutical NGO from Valencia), disposable medical material (catheters, syringes, needles, tubes, catheters ...) 100 computers (20 of which we had built for us and the rest were donations we refurbished and installed Linux on), rehabilitation and 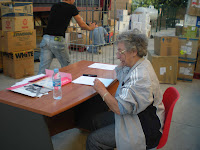 orthopaedic material for the disabled children and elderly people, a dentist's chair plus orthodontist material, crutches, miscellaneous materials for a maternity unit, new and nearly new clothing in very good condition, medical literature, wiring and other materials useful for repairs, hundredes of spectacles, toys etc, etc. We still have supplies left over that can go on the next container.

A big Thank you to everybody in saturdays team and all to all our donors, Victoria . (See the video on Youtube: CLICK HERE ) 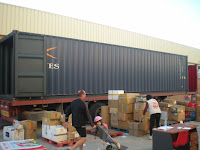 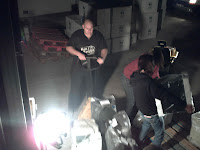 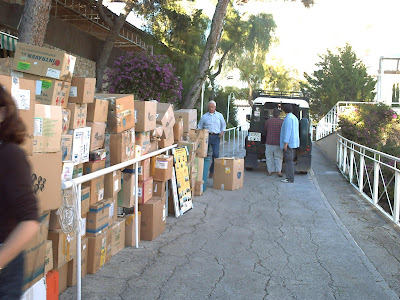 A puppet show in Yeka 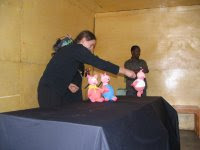 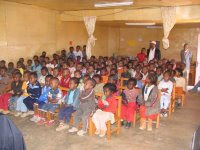 Just a few short days ago we were in Ethiopia .

We first came accros the school at Yeka just over a year ago, when it was not part of the Mediterranea Project. Now in just a few short months the change in the school is spectacular, with the incorporation of a dining room, a new kitchen and new bathrooms.

We went along to tell the children the story of the “three little pigs” which must have been a huge novelty.

We had the great fortune of having an Ethiopian narrator to help us. The children really enjoyed the performance and at the end of the story we could hear them sing the song that they had heard during the presentation.
No comments:

There are already 135 children under 5 eating at our school of Yeka. As well as the small children there are still two classrooms for the older ones who haven't attended school previously, among them there is a 23 year old pupil very much looking forward to learning.
The new dining hall we built is very big and it is used as two classrooms . We have recruited, teachers that have joined the senior teachers (who are the ones that teach the adult students ), kitchen staff, guards... a total of 12 people.
There are six new toilets and a shower. I did a medical check up on the children and most of them have a physical delay of 2 or 3 years, showing considerable signs of malnutrition. There are 4-5 year olds that weigh 10 kilos. The check ups gave us the opportunity to establish contact with the families of the children and to evaluate the socioeconomic situation. The families, most of them, are single parents, children under the care of grandparents, children of wood collectors and of seasonal workers. The fact that the children are able to eat at the school will reduce the financial burden that this families suffer and will prevent the possible abandonment of the children due to financial reasons. We sent two children to the ophthalmologist for showing significant squints. We will cover the medical costs for them. The children of Yeka , as well as the ones in Abugida are selected among the poorest, our representative told me that the selection of the new pupils at both schools was very hard because of the large number of applicants.

Abugida school looks like paradise. Some adoptive parents bought sports equipment and they have put up some goal nets made with sticks so they have formed a football team and the little ones are enjoying themselves a lot, they were even bought England and Brazil football kits (see videos in Youtube).
The new kitchen is up and running and the room the old kitchen was in is now first year primary.
The reception ceremony in Abugida was fantastic, it gets better every time, they welcomed us with dances and many children were dressed in their national costumes, the football team also all dressed up and they played a mini football match representing Spain and Ethiopia and we danced wildly with the teachers to the Ethiopian rhythm, which means dislocating our shoulders and the whole body in general.
The adult's class was very moving to see, there are even grandmothers ( two of them total swots ), women who attend the lessons while holding their babies in their arms, and some men. In total 60 adult students. They are absolutely thrilled to be attending the lessons, that not only allow them to learn but also in the case of the women, to be able to mix with other people and leave the isolation they tend ton endure in their homes.

ASSIGNMENT OF DOCTORS AND NURSES TO ETHIOPIA

We can say that it is now a reality, there is already a medical team working in Akaki.. An internist doctor and three nurses. They are going to be spending their month holiday working in an altruistic way at the two health centres of Akaki/Kaliti where there is not one doctor. At the beginning of November a General Practitioner and two more nurses will join them. All of them are form Catalonia. This is the first time Mediterranea has sent medical staff to Ethiopia, so we are very pleased. The bureaucracy wasn't easy but we managed to achieve what we wanted. The two centres lack means so we have allocated 3000 Euros to buy medication and disposable material. This will be carried out by the medical team during their stay in Ethiopia. At one of the centres there is an Ethio-Cuban nurse, called Frehiwot, who told us that in Cuba they used to call her Fruti, so now I guess she will be known by this super fantastic and super Cuban name- she is very happy with the presence of the medical team and so are they, since she will be of great help where the language is concerned.

HEADQUARTERS OF MEDITERRANEA IN ADDIS AND FUTURE PROJECTS

We are in the process of becoming accredited in Ethiopia in order to be more independent and be able to do more things. We are thinking of setting up at the Head Quarters a service of health support for women who practise prostitution. The idea is to offer them medical attention with diagnosis and treatment of sexually transmitted diseases ( including cervical smears that we will send to a laboratory ) and prevention through advice and handing out of condoms. At the same time they will be able to have the quick HIV test if they wish to. We also want our HQ ( Head Quarters ) to be a meeting place for this group of women who are so neglected and in need where they can feel comfortable without feeling judged by anyone.
In order to achieve all this we looked for possible premises near the areas where prostitution is and we found a house that is adequate for us at a good price so we are going to take it before anybody else does; it's between Arat Kilo and the end of Piassa and nearby there is a well known area of prostitution. While we are in the process of being accredited we will start some lessons for adults because we want the HQ to be an active centre. It has a big living room, two bedrooms and a bathroom, all in good condition. something important and to bear in mind for when our health project comes to light and becomes a reality.

This is all for now, please fell free to ask anything you wish.
No comments: