Update on the Abugida school 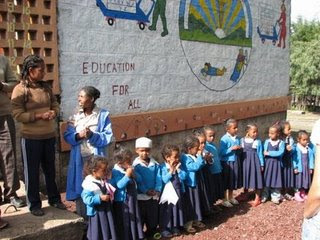 In the next few days the Abugida school will undergo further growth. This will consist of the following:

Two new classrooms (for the first two Primary classes) which will be built within the school enclosure but will be separate from the main building, the reason being that the Akaki "kebele" has informed us that Ethiopian law states that Primary classrooms must be built separately from Nursery classrooms.

An outdoor dining room. The Akaki "Kebele" informs us that Ethiopian law states that their children are not permitted to eat where they study nor study where they eat.

Complete exterior roofing and at the same time a renewal of the interior false ceiling which also needs repaired The rain has damaged the roof to such an extent that it will have to be totally rebuilt.

Abugida is a school which is under the control of the "kebele" governing the area of Akaki.

The fact that Abugida has become a "model" school (due to its successful management, the active participation of the village mothers and fathers, the quality of the dining room, the adult courses etc..) puts us in a position where the standards and expectations are high. For that reason we must follow the regulations scrupulously since we rely totally on the "kebele" for the continuity of this school.

The overheads have risen tremendously (even though we have haggled).
We CAN do this and we WILL do it come what may. All of us together and with your support and understanding we will succeed.

The new Primary building will be constructed in such a way that later it will be able to take the weight of another floor on top of it, ie the 3rd and 4th year Primary classrooms.

The first class of two year olds will start this academic year.
The construction company has promised to have finished the classroom for these children before the beginning of the new term.
The Edir of Akaki will receive a signed contract and he will personally supervise the construction progress.

I am very happy to work so closely with the Edires. They are like a state organization with tremendous social prestige within their communities. They have the power to make projects really work because they consist of neighbors associations which make the whole system more democratic.
In actual fact, we are beginning to have more personal contact with the parents of the children in our schools. We organize meetings during which they can express openly their fears, their worries, their joy or even their opinions as to whether they believe that their Edir is doing a good job or not.

We know, especially from previous experience (we only have to recall the behavior of the former Edir in our school in Yeka) that no institution is perfect and that greed is worldwide. We need to collaborate with these "officials" for the benefit of the people we wish to help. Unfortunately, the local Ethiopian NGOS are riddled with corruption and many members only seek their own enrichment.
No comments: 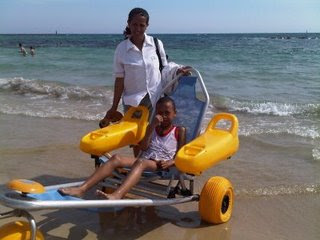 On the afternoon, just before Mykias was taken into hospital he could enjoy the delights of a dip in our beautiful Mediterranean waters thanks to the Red Cross summer operation which provides the equipment and volunteers who help the disabled to bathe in the sea.

He had never seen the sea before.
(All of the photographs have been published with the permission and to the delight of the people who appear in them.)

Well, in spite of Murphy's law we are here in Mallorca.

1. Anything that can go wrong, will go wrong. (Murphy's law)
2. Anything that can go wrong, goes three times wrong. (Murphy's law when dealing with any government).
When several things can go wrong, they will go wrong and will do a lot of harm. (A natural consequence of Murphy's law)
3.
4.Nothing is as easy as it looks.
5. Everything takes longer than you anticipate.
6.If several things can go wrong,at least one of these things will cause more trouble than all the others put together. ( the second natural consequence of Murphy's law)
7. If you are well aware that anything can go wrong and you try your absolute best so that nothing goes wrong then there's always something else ,that you didn't think about, that does go wrong.

Well, in spite of our good friend Murphy, we all arrived safe and sound but later than we had hoped for and so we are hours and hours behind schedule.
When we arrived in Rome, Mykias and his mother, because he was in a wheelchair, were helped to disembark from the aeroplane and taken to a different part of the airport from the rest of us. Needless to say, no-one thought to advise us of this and left the two of them to their own devices.
Unbelievable but yes, it took us FOUR hours to find them. Having had no other option, we all had to split up. Martha and her teacher continued on their journey to Mallorca and two of us stayed in the airport in an effort to locate Mykias and his mother, no mean feat in an airport like Fiumiccino which easily qualifies, in our humble opinion, as the dirtiest and most chaotic airport on this entire planet.
Miraculously as it might seem, we did eventually find the two poor souls. We had to buy new airline tickets because we had missed our flight, we had to wait in Rome for seven hours before catching the next flight to Barcelona and then a further four hours in Barcelona before boarding the aeroplane which would fly us to Palma de Mallorca.

Without going into any more details, Murphy's law was fulfilled right up to the last letter and absolutely anything and everything that could go wrong DID go wrong.
We finally eventually arrived in Mallorca at about 2.00 in the morning after a mere 27 hour journey.
Since Martha and Aldana had arrived on schedule (at 3.00 in the afternoon) they managed to enjoy a very pleasant trip to the beach and then later visited some of the beautiful places on this island.

Meanwhile,taking into consideration his weak physical condition, our dear Mykias coped admirably with the interminable hours spent in the two airports, his sole relief deriving from the treat of dining in MacDonalds in the memorable airport of Rome and the overwhelming views of the sea he could observe from the plane( as we approached our haven and much-loved Mallorca.) He even mentioned that he preferred MacRubbish to
" injera". Mykias is a child who rarely smiles (he has had few occasions to do so) but, my goodness , when he does, the whole place lights up.

Martha has been admitted to Son Dureta hospital today ( July 6th). She will have her operation on Friday ( July 10th).

Mykias will be admitted tomorrow (July 7th). He was exhausted when we reached Mallorca and unfortunately he is in a worse state than he was three months ago when we last saw him.

His mother is prepared for the worst.

Lets hope that he recovers and if not we will, at least, try to make his visit with us as joyful as possible.

Despite our continual battle with Mr. Murphy,on our long journey from Addis we have had the privilege of coinciding with some of the most affectionate people you could ever meet. I dearly thank all of those who work with the disabled in all of the airports that we used and particularly the assistants in Barcelona airport who at all times were loving and kind to Mykias.
I barely have the words to express the emotional welcome given on our arrival at Mykias' "adoptive" home where he will reside when he is not in hospital. The father of the family who has "adopted" Mykias and his mother during their stay in Mallorca gathered this child in his arms, carried him out of the car,( he had fallen asleep on the journey from Palma airport )this small, feather-weight child, tiny as a delicate bird and carried him to his bed with great tenderness. What a kind-hearted, lover of mankind.
What would we do without people like this family? What kind of world would we live in without them?

Today,too, our group of volunteers have rolled up their sleeves and gone into action.

Since we left Murphy at the airport everything is now going according to plan.
The child who shares the room with Marta in the hospital is a little "sweetie".

I leave you now until my next update. I have lots more to tell you but I need to recover some brain power after our odyssey.
Thank you so much for making it possible to bring Martha and Mykias here to Mallorca.