So far this year we have distributed over 200kg of supplies to people in the fourth world in Mallorca. Up to now, aside from distributing an average of over 500kg of supplies a year, we coordinated between restaurants and feeding centers for those in need, but the "Greed Crisis/Credit Crunch" will probably oblige us to help more actively with the feeding of those in need. More on this in the near future.
No comments: 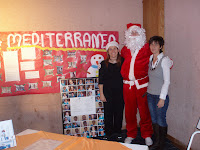 Magdalena Prats and Isabel Pericas are two very dynamic ladies who run the Escoleta Petit Club Nursery in Son Caliu, Mallorca. This year they not only became members and sponsors of Mediterranea but decided to hold a Christmas Fair on the 23rd December in order to raise funds for the children in Ethiopia. A letter was sent to all the parents and immediately the mums 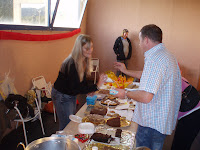 started baking cakes and delicious goodies in order to sell at the nursery’s Christmas party. Parents were very generous and sent in children’s clothing and bric a brac items. Family members, older brothers and sisters manned the stalls and the atmosphere was electric! The children of the nursery made a beautiful mural which was mounted on the wall using photographs from the Mediterranea website. €212 .57 was raised and all remaining children´s clothes were donated to the organisation.
A BIG THANK YOU to Isabel, Magdalena and all the children at the nursery.
No comments: