4th wheelchair for Addis on its way. 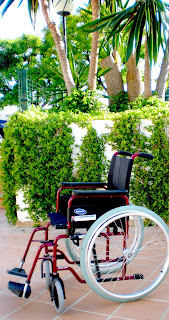 First of all, I would like to introduce myself. My name is David. I am a fireman, I am a nurse and I am a member of the Mediterranea charity. Last October I had the privilege of participating actively in a health project in the village of Addis, in Ethiopia.We collaborated with several schemes, one of which is called the Mother Theresa' centre which has two programmes, one in Sedest Kilo which attends to 900 human beings and another in Ascó which succours a further 500 people.
These points of refuge, particularly tend to the poorest of the poor, for example, those who suffer from Tuberculosis and HIV. They also provide aid to handicapped children and orphans many of whom have HIV having resorted to prostitution as a means of survival or transmitted to them through parents resorting to prostitution as a means of survival. They say that 40% of the population of Sub-Saharan Africa have HIV but I have evidence that in the capital city of Addis the figure is 15%, approximately one in six individuals. Polio is widespread resulting in terrible difficulties for these sufferers to be mobile. It is absolutely vital, that with our help, they receive essential orthopaedic apparatus such as wheelchairs, zimmers and crutches. This particular centre is run by the Sisters of the Order of The Mother of Calcutta Charity, volunteers and local workers. Their workload is immense and there are never enough helping hands. This centre is totally altruistic and thanks to you,a huge amount of work is being dealt with in terribly difficult conditions.

I have experienced first hand how your contributions are put to good use. I thank you from the bottom of my heart. It is important and praiseworthy to know that Mediterranea funding and materials are reaching, intact, people in need.
Thank you very much,
Kind regards,
David from Barcelona
No comments: