From the beginning of July till the end of August we are going to have with us a boy , a girl and her teacher from Ethiopia.
Those of you who read the Blogs will know they are coming over to be operated in the Son Dureta hospital.
The first two weeks will be taken up with the preop and post op procedures and once they are discharged they will remain another 6 weeks on the island in convalescence.

We need help:
1)Taking the children to and from the hospital.

2)We need one or various homes that will have them during their stay. During the days the children are in the hospital we hope to have the teacher stay in a hostal in palma that belongs to a member. That way the teacher will be near the children and she can also get to know the city.
Once the children leave the hospital we will need a place or places (in sequence) that can have them to stay for the following 6 weeks. We understand that 3 people to stay for 6 weeks is a long time but if we find a rotation system then it can be a good experience for all involved.

3)We also need volunteers to take them around, entertain them and to show them the island.
We would also need some good souls to take them to buy some toys and clothes as they come from very humble backgrounds.

If you should like to be an active part of this project please send us an email stating exactly what in, and when you would like to collaborate.

PS If you have not received this post also though your email it means that either we have an old address or a wrong one. Please send us your current email address so as to keep you up to date. Thank you.
No comments:

We are very pleased to announce that today we had a meeting with the president and administrator of the Balearic branch of the Spanish Association Against Cancer. They are interested in collaborating with us in our program to bring sick children to be treated in Mallorca. They would like to help with children with cancer. They have offered to help us with the transportation and board and lodging of the children.
We will be signing a collaboration agreement with them in the next few days.

We are very happy to inform that little Mykias will be able to come to Son Dureta (a teaching, main NHS hospital in Mallorca) to be operated on at the same time as Martha.
Mykias is an 11 year old boy who is having a very hard life but it has not 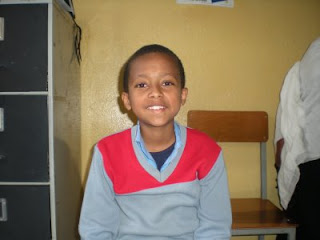 managed to wipe the heartwarming smile he has on his face most o the time, nor has it killed his desire to study.
Mykias has a large cyst in his brain which is growing. He suffers strong headaches, problems walking and vomiting aside from other symptoms.
There are not the means to have him operated in Addis Ababa, and even though his mother has had most of his paper work ready for the last three years so he can go abroad to be operated, till now no NGO had taken on the case.

Yesterday we had a meeting with the Son Dureta Hospital Director, Mr.Serra. We are preparing a Collaboration Agreement so that Mediterranea can have children we bring over from the third world, operated in Son Dureta with no cost to our NGO. At the same time Mediterranea will help medical staff from the hospital to go to work in the third world if they so wish. 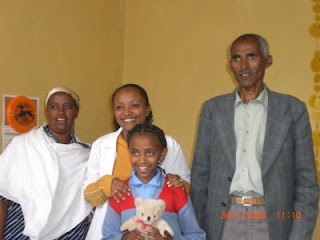 We are working so that in June Martha a ten year old Ethiopian girl can come to be operated.
Matha lives in Yeka and has 4 brothers and sisters. Her family income is near to 25 euros a month and Martha has a severe progressive scoliosis, if she is not operated soon she will become a severely handicapped invalid with no chance of recovery, marriage, work, and possibly a seriously reduced life expectancy.

She can not be operated in Ethiopia for technical an financial reasons. Just one orthopedic piece she needs costs over 12000€. She,like many other children was issued a letter form the Black Lion Hospital stating she could go to be operated in another country, The big problem for these children is how to get the help.As these are children they need to be accompanied by an adult, which increases expenses greatly, they have to get a birth certificate so as to obtain a passport (which they often can not often afford), and then come all the rest of the hurdles, so it is very rare that one of these children get the help they need to solve their problem. At the same time as in Martha's case, malnutrition endangers the success of the operation so we have boosted her nutritional input so as to better the outcome and healing of the operation.
Thanks to the head orthopedic pediatrical surgeon in Son Dureta the dream of having Martha operated here here is becoming a reality. There are still lots of hurdles ahead of us before we get her in to the operating theater but a lot has be achieved so far.

Victoria will travel to Ethiopia at the end of June to inspect our schools and to bring back with her Martha and her teacher. Martha only speaks Amaric and so a person Martha knows, likes and can translate has to come with her, so we chose her teacher from her school. The trip will coincide with a quiet time in the operating theaters and school holidays so that Martha and her teacher do not miss school They will have to remain here near to 2 months and we will be needing help with them during their stay. More on this later.

There is a 12 year old boy in her school with a growing cyst in his brain, we would like to have him operated too. We will start to study the case and see what options we have. It is impossible to turn your back on these cases.
No comments: