A Small Light at the End of the Tunnel 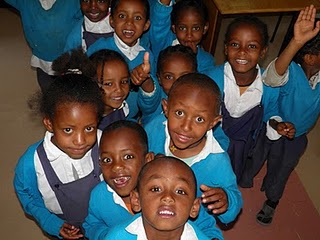 This Christmas we received some good news: at last it seems that we have found a substitute mother for a child at Abugida who is on the point of becoming orphaned.  This little boy of six only has his mother and she, tragically is gravely ill having AIDS and terminal breast cancer.
The future of a child in Ethiopia and particularly of this age is very uncertain if left alone.  The most likely outcome being that he would increase by one the number of children living in the streets.  From one day to the next passing from the effective warmth of his home and the security of the school to a most horrible scenario.
We have been trying for a long time to find a family from Abugida who in exchange for a monthly payment would agree to be the child’s substitute family.  But if they don’t know the children from birth they won’t accept them, not even with the monthly payment.  This situation has been causing us anguish since shortly after starting with Abugida.
Now there is a small light at the end of the tunnel with this first lady, who has agreed to become a substitute mother.  The procedure that we have decided on for such cases is as follows: when the mother is very ill the substitute mother starts to care for her and take charge of the child, washing the clothes, cooking and accompanying the child to school.  The child and the mother slowly become accustomed to the new mother.  In this way we believe that it is less painful for the mother and beneficial for the child who gradually becomes accustomed to the new mother figure.
Up until now the sponsored children who live with adoptive families are children who have lived with these families since they were very small.  This will be the first child to join a family at a more advanced age.  We hope that it will go well.  To these substitute mothers that will have charge of a child without having known them since very young we shall pay 500 birrs a month.  Bearing in mind that the child will have breakfast, lunch and tea at the school from Monday to Friday we believe that this amount will be sufficient and will allow them to start their life together.
Our level of involvement in Abugida means that we know all of the cases and all of the problems that arise.  What was a school with x children has been converted into a school where every mother, father, grandparent is known and of course each boy and girl, boys and girls each one of which is a treasure and a challenge for a better life.
It is a big responsibility that we have taken on, a big commitment.  It would be much easier for us, emotionally speaking if Abugida had continued being a school of x children…but this is what happens when you get to know the people.
No comments: